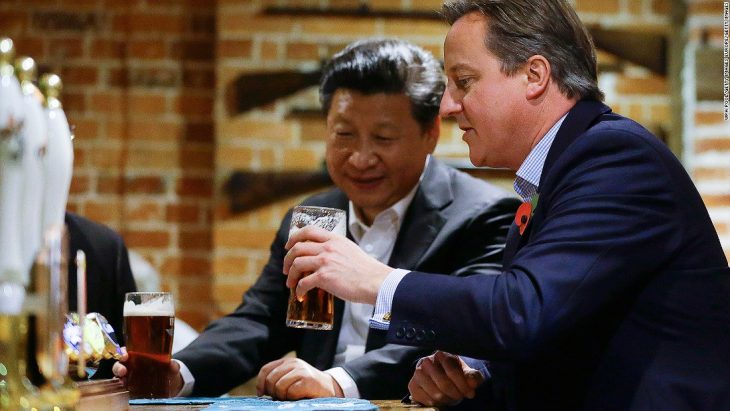 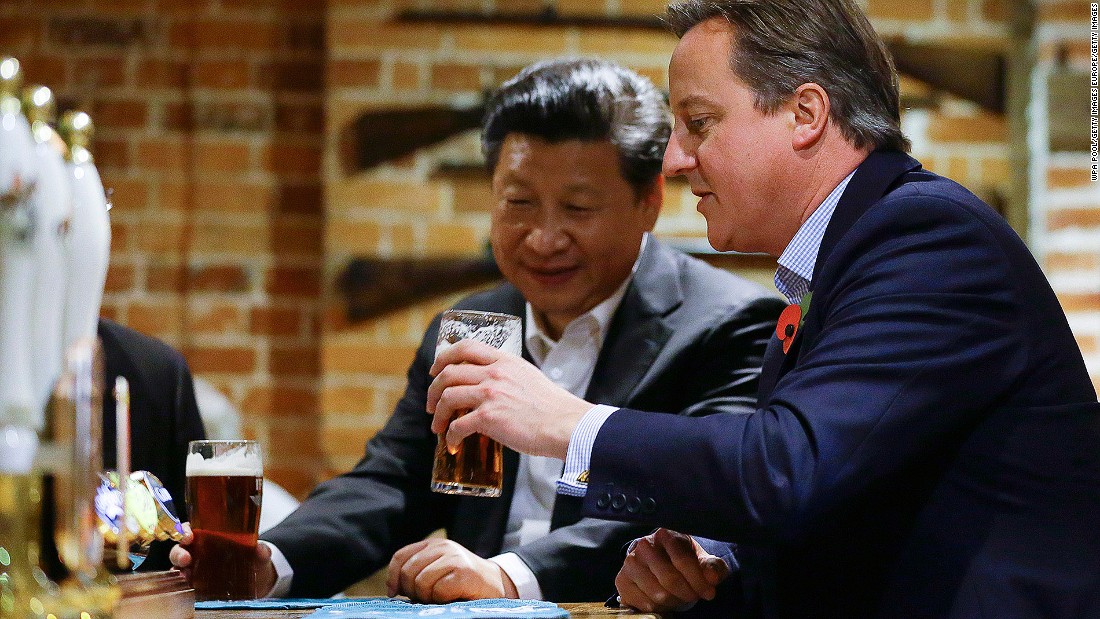 (CNN)When he says make room for lovebirds, a park spaces out its public benches along a lakefront.

When he smiles after taking a bite of a local delicacy, a national culinary superstar is born.
When he has a pint at an English pub, it becomes a pilgrimage for many travelers.
As China’s president during a time of unprecedented growth and change, Xi Jinping has guided a number of transformational initiatives.
But few industries have felt his influence so profoundly as China’s exploding domestic tourism sector.
From the pub he visited to mundane tourist observations he has made, here are ways in which Xi Jinping has had an impact on tourism within mainland China and, in some cases, beyond.

“I dropped into The Plough at Cadsden for a pint of IPA and some fish and chips with China’s President Xi,” tweeted David Cameron in 2015.
UK’s former prime minister probably didn’t expect that, in addition to the Chinese president, he had also brought along many Chinese tourists — who are keen to sample the food and a pint of the Greene King IPA Xi enjoyed — as well as a business deal to follow.
The 16th-century pub has recently been sold to a group of Chinese investors for an undisclosed fee.
Before Xi’s visit, the Buckinghamshire tavern was already famous for being a UK prime ministers’ local because of its proximity to Chequers Court, the country retreat of the head of Britain.

Xi’s taste buds have become so influential that Hong Kong’s Apple Daily has compared the president to a walking Michelin guide for China.
Want to try the pig-blood noodles Xi sampled 20 years ago? A noodle shop in Fuzhou, Fujian, where Xi ate noodles two decades ago has leveraged the president’s popularity into long lines.
Xi confirmed his love of the dish in 2014, and perhaps made the shop’s owners’ dreams come true, when he re-visited the place and had another bowl.
The owner told a reporter that ever since the news broke out, there’s been a significant increase in customers.
Items that had previously been sold out at around 11 p.m. were gone by 5 p.m.
In 2014, according to Hong Kong-based newspaper Ta Kung Pao, after the small town of Gutian began promoting its “Red Army rice” after Xi had eaten a bowl (the dish is said to resemble an historic communist army staple featuring pumpkins, yams and sweet potatoes), the town reported an 80% growth in tourist visits over the previous year.
READ: 20 China travel tips

Perhaps the best illustration of the Xi Jinping effect on local cuisine is what’s come to be known as the Qing-Feng dumpling incident.
In December 2013, Xi and a handful of government officials visited Beijing’s Qing-Feng Steamed Dumpling Shop for lunch.
Xi queued, paid and picked up his RMB21 lunch by himself — a bowl of baozi (steamed dumplings).
The dish became a craze in mainland China, turning the humble shop into an overnight sensation.
The shop remains a huge attraction with travelers.
Lining up for dumplings now takes at least an hour, according to local reports.
During the October 2014 holiday following Xi’s visit, different branches of Qing-Feng in Beijing recorded at least a 90% increase in orders — mostly from tourists.
Many overseas business interests called to inquire about franchise rights to the shop.
Visitors can now order the “President Set” to try the meal Xi ate.
In an unexpected twist, the shop has also become a popular protest site for Chinese citizens who hoist banners and express dissatisfaction — often protesting government corruption — before heading in for steamed dumplings.

During a visit to Maldives in 2014, Xi commented that Chinese tourists should behave themselves and act in more civilized fashion overseas.
“Don’t throw empty bottles everywhere,” he instructed. “Don’t damage their coral reef. Eat less instant noodles. Eat more local seafood.”
The instant noodle remark was a humorous reference to a widely publicized report in 2013 about a Maldives resort allegedly removing kettles from the rooms of Chinese tourists, fearing they’d only cook cup noodles instead of spending money at the resort’s restaurant.
We can’t confirm whether Chinese tourists are still munching instant noodles in their rooms, but Maldives travel package sales for some companies reportedly doubled after the president’s visit.
MORE: Librairie Avant-Garde: China’s most beautiful bookshop

The Chinese president can be more effective than a tourism board campaign for attracting Chinese tourists.
Wherever Xi travels internationally, that country can expect a boost in Chinese tourists.
In addition to the Maldives, Sri Lanka, New Zealand and South Korea are some of the countries that have benefited from the Xi bump, with a rise in Chinese tourists following a visit by the president.
Package tours to Sri Lanka during the October 1st National Day holiday in 2014 were fully booked after Xi visited the country in September.
South Korea received twice the amount of Chinese tourists during its 2014 holiday period, compared to the same period in 2013.
Australia and New Zealand promised to simplify visa procedures for Chinese tourists after Xi’s visit.
Chinese online company Sina has introduced a special travel page promoting each of the places Xi has visited.
To keep up with Xi’s movement, many Chinese netizens follow celeb fan blogger Xue Xi Fen Si Tuan, who sometimes releases Xi’s official itineraries and whereabouts before China’s official news agency.

Anyone who’s visited a Macau casino knows what it’s like to be surrounded by whales — finding a betting table with a minimum wager of less than $100 per hand is almost impossible.
And those are for ordinary gamblers.
VIP gamblers in some private rooms reportedly are required to wager as much as $125,000 per hand.
For a while, those high stakes made Macau hog heaven for high-rolling government officials.
That was before Xi’s high-profile anti-graft campaign aimed in part at government waste and corruption.
According to industry experts, Xi’s anti-corruption push has stopped a number of VIP gamblers from visiting Macau — a major reason for a 27-28% plunge in the stock values of the six big casino operators in the city in 2014, according to the Financial Times.
READ: The next big thing in Chinese cuisine?

In Hangzhou in eastern China, West Lake is a well known tourist attraction famed for its romantic lakeside views.
According to state media China News Service, when West Lake was opened as a public park in 2002, Xi, who was then Secretary of the CPC Zhejiang Provincial Committee, began offering suggestions on how to improve the visitor experience.
One of these included reducing the number of benches along the lake to provide more privacy for lovebirds.
“Xi thought that since the benches were too close to each other, it’d be very uncomfortable for the couples,” Liu Ying, director of West Lake Scenic Area Management Committee, told online news platform The Paper.
The park complied, giving couples a chance to sneak a few more private moments, courtesy of their current president.

In October 2014, Xi called for less “weird architecture” to be built in the country, a reaction to the increasingly extravagant construction projects spurting up around China.
Xi cited the CCTV headquarters in Beijing, completed in 2008, which has earned the nickname “The Big Pants” for its resemblance to a pair of trousers.
Beijing authorities responded swiftly by announcing plans to place restrictions on new building designs and materials.
Does Xi’s conservative architectural taste mean the end of wacky and unusual structures in China, like these?
We hope not.
MORE: China’s spicy wonderland: How to eat like a local in Guizhou

Any mall or shop visited by China’s First Lady, Peng Liyuan, seems to benefit from the so-called “Peng Liyuan phenomenon.”
Hoping to take advantage of a visit from the president’s wife, Seoul shopping center Lotte FINTIN put up a poster of Peng following her July 2014 visit with a caption that read, “Lady Peng Liyuan rode on this elevator when she visited Lotte FINTIN.”
Another reads, “Thanks to China’s national mother Peng Liyuan for visiting Lotte FINTIN.”
Products she purchased in the mall are marked with special signs.
Some products have seen a three-fold increase in sales, according to Chinese news site Huan Qiu World.