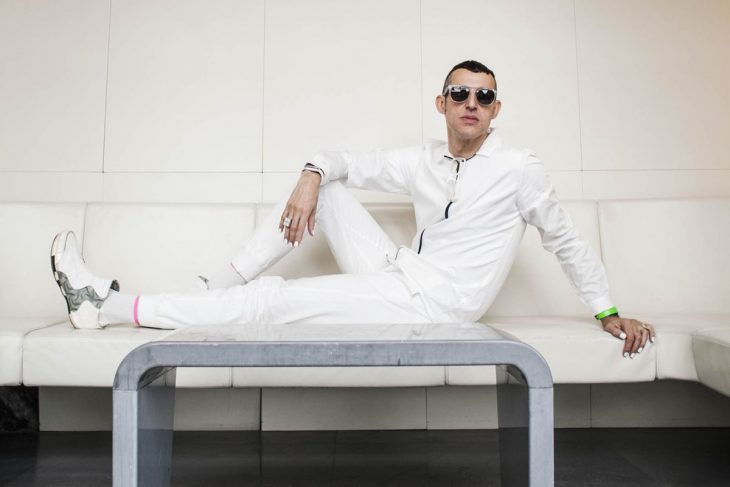 Designer Karim Rashid is known for his sexy but simple designs, such as the Bobble water bottle or the Garbo plastic trash can. His next project is a new wine bottle for Stratus Vineyards.

He describes his style as "sensual minimalism" and calls his products "blobjects." His love of pink and white appears not only in those products but also in his own wardrobe, which consists almost exclusively of white, pink, and a few bright yellow clothes. His latest project includes the new integrated architecture and design firm, Kurv. He logs around 400,000 miles in the air each year and has several million miles banked on each airline alliance. “I’m on Aeroflot a lot this year, as I’m working in Russia.” He also spends 180 nights, or half the year, staying in hotels.

How to Make Your Own Coffee on a Plane.

America has a history of bad coffee—all the airlines, whoever they are, the coffee is atrocious. And I love coffee, I’m completely addicted, so I carry organic single-serve powdered coffee with me—it’s basically freeze-dried, instant coffee. So I get a cup of hot water from the cabin crew and use that—sometimes I order a half-cup of hot milk, too, so I can make a strong latte, which I love. There was one woman beside me on a plane complaining about the coffee, so I handed her one of my packets. When we disembarked, she thanked me profusely, I don’t know how many times.

I always check the Bandsintown app when I book a trip to a city to see what bands are playing when I’m there. When I get to a city, I can just open my phone and know who’s playing that night, the location, and its distance from my hotel, and buy tickets on the app. I’ve seen some amazing concerts in Berlin (Pink Floyd), Stockholm (XX), London (the Killers), Kiev (Disclosure), Milan (GusGus), Moscow (Tesla Boy), Belgrade (Air), Düsseldorf (Kraftwerk), and on and on.

How to Unpack: Just Fill up One Drawer

When I design hotels I don’t put any storage anywhere except the main area—that’s the one closet where you can put everything. If there are drawers in the bedside cabinet, so many cupboards, even an over-the-top TV console that is also a cupboard? It’s so unnecessary, and you end up leaving things behind or losing them. The cleaner the room is, the more minimal it is, the lower the chance you’ll leave anything behind.

The hotel industry loves to fill rooms up with things, which comes from the idea that a hotel room is an extension of your home. But for me, it’s too much stuff, too much clutter. If I’m going to spend three days in there, I need to be really free and able to think. I take every piece of paper, every note or book, and put it in drawers to hide them. I don’t like visual clutter. And in the bathroom, too—there’s a crazy amount of stuff they shove in there. The worst for this is the W hotels: There are so many Ws around everywhere, on everything—the desk, pen, the pad, the soap, it’s too much. Once, when I was staying for two weeks at the Hudson Hotel in New York, which Philippe Starck designed in the late 1990s, I removed almost all the furniture and rearranged the bed. It was up against the window, with the light behind you, and you want to wake up looking at daylight coming in through the window. When I left, the manager came to me and said, ‘Thanks, we really like what you did with the room.’

How to Truly Make Sure You Remember a Place: Get a Tattoo

It started 25 years ago, when I got my first tattoo in Toronto. After I moved to New York, and I started getting busier, traveling, it became a habit, a present to myself: I consider each of them a poetic memory of places [where] I’ve spent a lot of time. To date, I’ve done 26 in 26 different cities. There’s a guy in Istanbul, Emre Dizici, near Taksim Square, who is really fantastic; he’s been practicing for almost 30 years. Japan was the hardest place to get one done, as it’s still frowned upon [as a symbol of organized crime]—in fact, I was recently at an Intercontinental hotel there, and they wouldn’t let me in the swimming pool because of my tattoos. I found my tattoo artist there when I went for a drink with a young guy I was working with; he rolled up his sleeves and showed me his tattoos and told me not to tell anyone at the office he had them—and then recommended his tattoo artist.