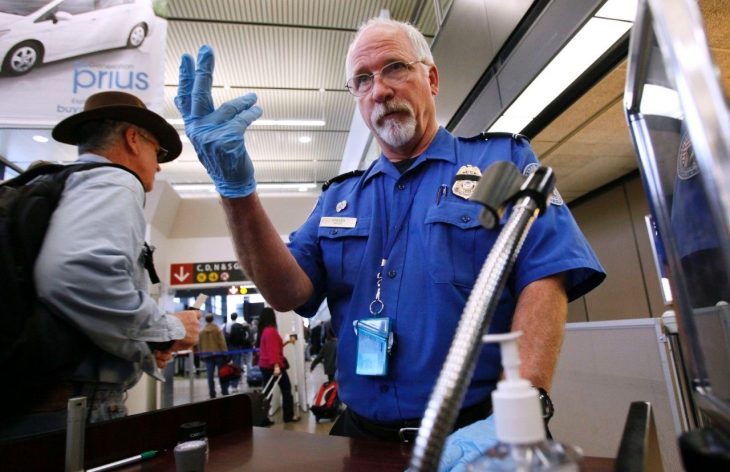 Next? A TSA agent beckons the next passenger at Seattle-Tacoma International Airport. (AP)

The Transportation Security Administration is the federal agency everybody loves to hate. Call them necessary evil if you will, but bad-mouthing them all the time is not always fair.

Some checkpoints have been organized in a way that makes the job easier, while others are lacking the infrastructure or staff to get people faster through security.

While many people dont understand why checking peoples belongings can take so long because Im not carrying anything dangerous, you may be surprised at what other people have in their luggage. As many as 2,653 firearms, 83 percent of them loaded, were discovered in 2015 in carry-on bags at checkpoints across the country–seven a day on average–according to a TSA report.

More from The Active Times

The 17 Most Dangerous Airports in the World

20 Unique Places You Can Actually Stay In

The Fittest Airports in the World

Believe it or not, TSA agents dont like slow lines either, but passengers share some of the blame for the slow processing. As one former TSA agent told Fox News: I always found it surprising that people did not know they had to remove shoes, laptops, liquids, etc.

Doing that as youre about to get screened only holds up the line. Check out some of the country’s worst TSA checkpoints.

The John F. Kennedy International Airport has by far one of the worst TSA checkpoints. According to cntraveler.com the average wait time is 16.8 minutes.  One individual wrote a review on airlinequality.com, in which he explained that the queue was massive and moved exceedingly slowly” and that “it took over an hour to check in and then there was the queue for security.

Another reviewer wrote: At New York JFK as I was going through security, there were many passengers there who clearly did not understand English or the confusing security procedures we were required to go through and the staff had absolutely no patience for them. Confused looks were met with insulting and sarcastic remarks from staff. More complaints are written in other reviews.

Newark Liberty International Airport (EWR) has been known for employee misconduct and theft. According to nj.com, a few years ago the TSA said four of its employees at Newark Liberty International Airport were dismissed and dozens of others were suspended this week in an investigation of lax baggage screening and supervision.” Another six employees were exonerated during due process hearings. The average wait time at Newarks checkpoint is 16.5 minutes.

Orlando International Airport is said to be extremely unorganized. According to a recent yelp review, one individual explains: MCO was a sea of people and the lines extended way beyond the stanchions…it was a mess. For some reason, my line moved insanely slow to the point I was worried about catching my flight. By the time I got up to security, they were trying to move everyone so quickly that we didn’t have to do the normal, shoes off/laptops out procedure. They were funneling people through as fast as possible in what seemed like an effort to make sure these planes had people on them.

A not so happy individual  reviewed Los Angeles International Airport:  The TSA at LAX is an island of mediocrity in a sea of horrendous government bureaucracy designed to trick the public into thinking theyre safe. He also explains: Ive seen policies and basic rules broken left and right.  Ive seen screeners on power trips over cowering unknowing passengers. They almost managed to destroy my laptop, then laughed about it. Now, if that doesnt sound like one of the worst checkpoints, Im not sure what is.

A seemingly annoyed individual reviewed Louisville Regional Airport: I arrive at the Louisville airport TSA security check point. They let a few people in front of me through, then a family and when they got to me, they closed the non-X-Ray line and force me to enter the full body scan line. After that I find my bag being inspected by one of the rudest people in my entire life. He proceeds to go through my entire bag and even touch my toothbrush! He then runs my bag through the machine again, to end up going through a second smaller bag that was in my suitcase.

Cant stand the worst? Check out the Best TSA Checkpoints in the U.S.