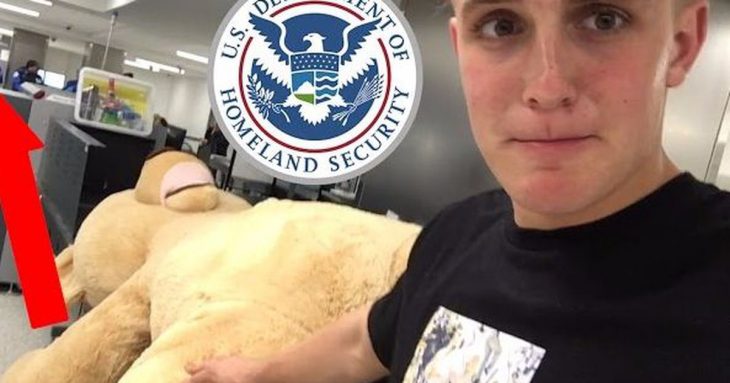 A YouTube star and a stuffed bear caused quite a social media stir this week after Transportation Security Administration officials found out they were being pranked.

The buzz began after TSA posted an Instagram photo of a sad looking bear at the airport.

“He was abandoned by his owners at LAX after the airline and TSA determined that he was just too big to be screened as a carry-on and taken on the plane,” TSA wrote in the initial photo caption, using the image as a reminder to passengers about carry-on guidelines.

Many commenters then called out TSA, suggesting the agency was violating the 4th Amendment and ruining a kid’s Christmas by not letting the bear on board.

Turns out: The TSA was being pranked.

On Dec. 8, YouTuber Jake Paul uploaded a video titled “TAKING 9ft TEDDY BEAR ON AN AIRPLANE (cops came).” In it, he tries to take “Brodie the Bear” a gift for his girlfriend through airport security but is shut down.

The video features Paul’s interactions with airport officials and bystanders.

Click on the link in our profile to read a blog post on this subject. ***UPDATE*** After watching a YouTube video posted by the traveler, weve learned that hes a popular YouTuber and this was a stunt to see if he could get the giant bear on the plane. He even made up a backstory that the bear was a gift for his girlfriend. The bear did not belong to a child. The passenger had actually bought a ticket for the bear. After the airline and TSA decided the bear was too large, the airline offered to refund the ticket and the traveler was given the option of checking the bear as checked baggage. The traveler opted not to check the bear and left it behind.*** Why does this gigantic teddy bear look so sad? He was abandoned by his owners at LAX after the airline and TSA determined that he was just too big to be screened as a carry-on and taken on the plane. Its a good idea to check with your airline prior to traveling with overly large items as cary-ons. If you see this wayward bear strolling the streets of LA, please feel free to feed him. #TSATravelTips

TSA eventually realized who the bear belonged to.

The agency posted an update to its Instagram photo, as well as a lengthy blog post on Thursday titled “TSA Myth Busters: Did LAX TSA Officers Prevent a Childs Teddy Bear from Flying?”

“A picture of the bear and an incident report were sent to me as an idea for an Instagram post,” Bob Burns, who runs for TSA Social Media, wrote in the blog. “I thought it would be a good opportunity for a travel tips post letting people know that very large items can sometimes pose problems when being carried on the plane. Even though I didnt mention a child in the Instagram post, some quickly assumed it was a childs bear and imagined a heartbroken child having to leave its friend behind for the holidays. This was not the case. It belonged to a grown man.”

He didn’t identify Paul, though he said the YouTuber “wasnt even certain the bear would make it onto the plane telling his YouTube viewers that he had a 50/50 chance. In one scene, you can watch him have a little trouble stuffing the bear in the back of a minivan. He also confesses in the video of creating a fictional back story for the bear to help him get it on the plane. He said it was gift for his girlfriend. So no children were involved in this incident.”

Pranks are one of the most popular online video genres. According to video analytics firm Tubular Labs, searches for prank-related videos across all social media platforms account for 7 billion views so far this year.

Paul seems amused by all the attention. He tweeted the hashtag #LetBrodieFly on Thursday.

Brodie Da Bear has now been on national news